Stories With a Purpose 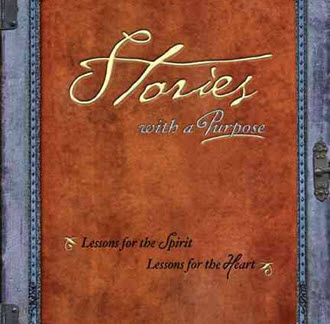 "Stories With a Purpose" is a regular feature of the St. Patrick Catholic Church Web site. It is edited by Ronnie Muro, the St. Patrick Family Life Coordinator and the co-author of the book "Stories with a Purpose: Lessons for the Spirit, Lessons for the Heart" that was published by St. Mary's Press in 2006. If you have any inspirational stories that you would like to submit for consideration, click here to send an e-mail to Ronnie.

If you would like to order a copy of this book from St. Mary's Press, click here.

Periodically, new stories will be published here on this page. Visit often to receive a blessing through the reflections contributed by our parishioners and friends.

Editor's Note:  In this story, author Ronnie Muro remembers Don and Louise Meadows, a lifelong couple who lived their lives as one.

No, I did not mistype the title! It really is supposed to be “DonandLouise” with no spaces. For, you see, that is how it was for so many years for Don Meadows and the love of his life, Louise, whom he affectionately called “Lulu”.

You hardly ever saw them apart. Whenever you saw Don, you usually saw Lulu. There was no space between them.

Don once told me they started holding hands in high school (Phillips High in Birmingham) in the late 1940’s. That led to a lifelong friendship and love affair that lasted into the next century. They were together for more than seventy years – though not physically for the last few, after Louise passed away in 2010. Still, they were together as Don signed his Christmas cards “Don and Lulu”.

Don and Louise were well known as the champion ticket sellers for our annual church Springfest fundraiser. Each year, it was a battle for second place as Don and Louise outsold everyone else. And, in typical Don fashion, he gave all the credit to Lulu. One year they also helped drum up ad sponsors for our bulletin insert. And once again, they led the way, finding many new sponsors to contribute to our cause. I remember Don telling me, “They just can’t say no to Lulu!” 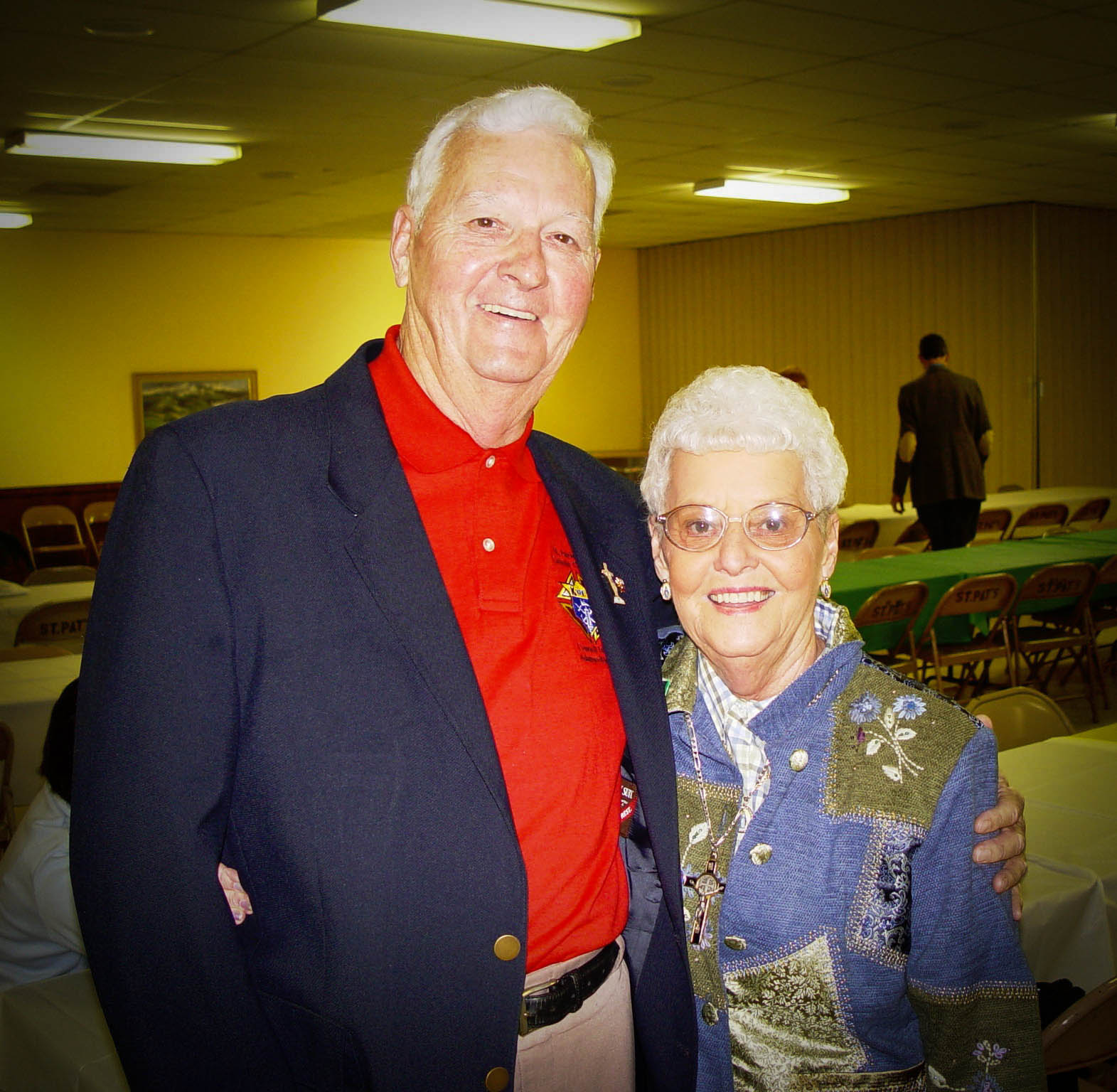 2 Timothy 4:6 "I have competed well; I have finished the race. I have kept the faith."

After Louise passed away, Don sank into a great depression. It was a real struggle that he probably never got over, only eased by the onset of memory loss that plagued him in later life. But even then, as he told stories about the love of his life, his eyes would brighten, and a smile would cross his face. Like the time they got in trouble when Lulu tried to kiss him in the cafeteria. Or maybe it was Don doing the trying! I forget, but it was lovely to see him smile telling that story.

As I reflect back on DonandLouise, there is something else that occurred to me. It could not be just luck or fate that held them together. They had something else going for them. I am sure Don would agree. It was DonandGodandLouise. With the Good Lord right in the middle, those two lived a life of love that stands as an example and a role model for us all.

More Stories with a Purpose by Ronnie Muro
The Handshake
Ronnie Muro talks about a simple handshake that became memorable -- because of the man behind it.
Read about The Handshake
Called By Name
Ronnie Muro describes how Father Pat Sullivan changed his life forever -- just by calling his name.
Enjoy Called by Name
The Loaves and the Fishes
Ronnie Muro reflects on one of the many lessons taught to him by his mother.
... as long as she was around EVERYONE was welcome to eat.
The Voice
It's a voice he heard many times in his life, a voice he will never forget.
Read about The Voice by Ronnie Muro
A Christmas Gift from Trent
In this story, author Ronnie Muro learns a lesson about unselfishness and the true meaning of giving, a lesson he learns from a young boy named Trent.
Enjoy this special story
A Box of Chocolates
Ronnie Muro talks about his longtime affiliation with St. Patrick and the many blessings it has bestwowed upon him.
Read this this story dedicated to a person who provided a blessing to many lives at St. Patrick and beyond.
The Warmth of the Sun
How can so many see the presence of God in everything, he asks, yet so many never see God at all? For answers he turns to the Sun and the Son.
Ronnie Muro contemplates on the presence of God in the world.
Thank You! Thank You! Thank You!
Ronnie Muro gives thanks to God after the recent birth of his first grandchild, Madeleine Rose Wharton.
"How can I feel such joy when others are still waiting for their prayers to be answered?" His answer came in a simple answer from a friend.
Clearing Away the Brush
Ronnie learns that God puts us in the right place at the right time.
Read more in this Story with a Purpose
Springfest Spirit
Ronnie Muro recalls one his most memorable Springfest experiences. It was an experience that taught him a valuable lesson about service and fellowship.
Enjoy Ron's story of Springfest Spirit
A Miracle
This story was part of Ronnie's talk at the 2007 Lenten series sponsored by Father Gray Bean and also appears in his book "Stories with a Purpose: Lessons for the Spirit, Lessons for the Heart".
n this story with a purpose, Ronnie Muro prays for a miracle. Was his prayer answered?
Jesus Loves You
Ronnie Muro remembers Benny Bakane's message and finds the presence of that message all around him.
Read more about Benny Bakane in this wonderful story
A Sweet Tootsie Roll Memory
Ron shares a sweet story of orientation to this important annual fundraiser.
"Slowly she opened her fist and let a few coins drop in my can. Then, quietly, she shuffled along her way without saying a word."
Young at Heart
Ronnie shares a day in his life in which he learned an important lesson from his father.
Enjoy Young at Heart
More Stories with a Purpose by Other Contributors
I Can
He thought it would be a normal day until God showed him something memorable.
Read Louis Muro's story, "I Can"
Five Minutes with Charlie
Louis Muro remembers his friend, Charles Blanchard.
Read about Five Minutes with Charlie
Mr. Tony's Christmas Gift
Louis Muro remembers the most meaningful Christmas gift he ever recevied.
Read about a gift from Mr. Tony
The Day My Life Changed
Is God really in control of your life? Learn how parishioner Doris Moody learned to "let go and let God."
Read this Story with a Purpose
It Never Asks a Crumb
An insightful sharing by Louis Muro of a very low time in his life
Read It Never Asks a Crumb
Attitude
A noted Bible teacher points out that our attitude impacts everything we do in our daily lives.
Read "Attitude" by Charles Swindoll
Sacrament of the Sick: One Man's Experience
The late Cruz Wathen writes about a personal and intimate experience with the Sacrament of Anointing
Read Cruz's personal reflection on the Sacrament of the Sick
Answered Prayer
This is a story of pain, a story of hope, but mostly a story of faith and prayer.
Read Pauline Brasfield's story about an Answered Prayer
One Penny
Louis Muro found spiritual renewal during his work with the Knights of Columbus Tootsie Roll Drive.
Ready how the Holy Spirit worked through One Penny
Jessie's Prayer
Pegi Gilmore shares a simple prayer that she learned from a wonderful friend.
Click to read about Jessie's Prayer
The Guy in the Wheelchair
Louis Muro meets Jerry and finds that assumptions and prejudices can blind us from seeing the truth and God's many messages.
Read The Guy in the Wheelchair
Seconds Were Always Free
Our lives can be affected by special people involving the simplest of things
Read Kevin Whitaker's memories of Mrs. Schober in this Story with a Purpose
Making a Difference
In this simply story, we learn how what we do, no matter how smalll, can make a difference in someone's life.
Are you Making a Difference? Read this insightful story.
The Brick Man
Do you remember Mr. Norman? Louis Muro shares a valuable lesson in this insightful story.
Read "The Brick Man"
A Journey to the Eucharist
Brian and Suzanne Noon share their long but ultimately glorious faith journey
Read this insightful and interesting story about A Journey to the Eucharist