The Guy in the Wheelchair

Editor's Note: In this story with a purpose, Louis J. Muro meets "a guy in a wheelchair" and the experience makes him realize that our assumptions and prejudices can blind us from seeing the truth and God's many messages.

Although none of us likes to admit it, we are all at times victims of our own ill-conceived assumptions, misconceptions and prejudices. We all form ideas about someone or certain people based on what we have heard or based solely on how we as individuals view the world.

Sometimes we think about God and his messages and believe they are complex and hard to understand. But I have learned over the years that God reveals his many messages to us in the simplest of ways and many come through the simple events of everyday life. The problem is that in many cases we are blind to God’s many messages because we don’t take the time to open our eyes to see.

Such an incident happened to me more than 20 years ago when I took a job as a technical writer at a large life insurance company in Birmingham. I am notoriously terrible with names and those first few weeks on the job were a real challenge to me as I tried to match faces with names in that large data processing department.

But there was one guy whose name I had no trouble remembering. His name was Jerry and the reason I was able to remember his name so easily was because he was in a wheelchair. For many weeks, while I was trying to remember which guy was Tommy and which guy was Richard, I had no problem remembering Jerry. To me he was “that guy in the wheelchair”.

During the next several months I started working with all the people in the department on a day-to-day basis and I eventually was able to remember all of their names. I also got to know all of them more personally, including Jerry. I had to work closely with many of them to get the information I needed for my projects and in doing so I learned about their backgrounds, their families, their hobbies, etc. We all became pretty good friends and the interaction with these people made it a very enjoyable place to work for me. Jerry, the guy in the wheelchair, was probably one of the ones that I got to know the best. 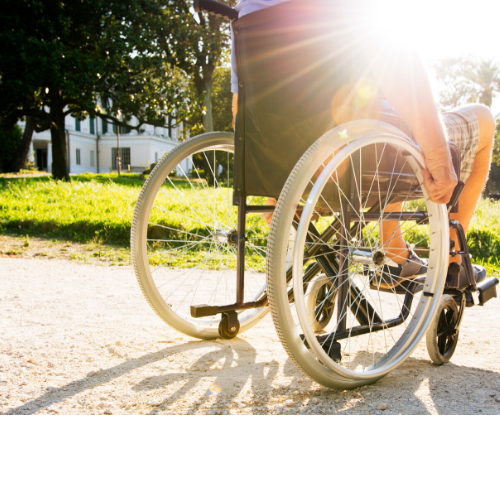 “Just like a blind man I wandered along
Worries and fears I claimed for my own
Then like the blind man that God gave back his sight
Praise the Lord I saw the light.”

At least once a day some of us would gather in an office and talk about work (when we should have actually been working), sports or current events. The topics were endless and Jerry was always right there with us, talking, laughing and participating in the conversation.

It was after one of these gatherings that something really hit me. I was walking back to my cubicle and suddenly I realized that Jerry was no longer “that guy in the wheelchair”. It struck me that I had not thought about that wheelchair in a long time. Now when I looked at Jerry I only saw Jerry, a co-worker, a young, smart man with a great personality. I saw a friend.

I remember sitting there thinking what a breakthrough this was for me. I realized that originally I had viewed Jerry differently because he was in a wheelchair. But over time in getting to know him I found out that he was no different from me or any of the people in that department.

I thought about Jesus Christ and the story of His healing of the blind man in the Bible. I realized that I was blind when I first looked at Jerry. I only saw the wheelchair. But through the grace of God my eyes were eventually opened and I saw Jerry. The wheelchair had disappeared. I was blind but now I could see.

Recently I was eating lunch, sitting at a table outside, enjoying a rather warm day. I looked across the parking lot and saw a guy in a wheelchair getting out of his van. I watched him and remember thinking how adept he was at maneuvering around in that wheelchair.

I continued my lunch and several minutes later I saw the wheelchair approaching me out of the corner of my eye. I looked up and suddenly the wheelchair disappeared as I realized it was Jerry, my friend and co-worker from long ago. I had not seen him in more than 15 years but immediately the feelings of that long ago friendship were renewed. We talked for a few minutes, catching up on our work situations and making small talk. It was great to see him.

As he left I had to chuckle to myself. It had happened again and the Lord had sent me a reminder. My lesson from long ago was reinforced. When I looked across that parking lot I saw a guy in a wheelchair. But when he approached me, again the wheelchair disappeared and I saw only Jerry.

Bob Dylan once called Hank Williams Sr. the greatest songwriter who ever lived. Thinking about Jerry and writing this story, I remembered Hank’s great song “I Saw the Light” and one of my favorite stanzas from that song:

“Just like a blind man I wandered along
Worries and fears I claimed for my own
Then like the blind man that God gave back his sight
Praise the Lord I saw the light.”